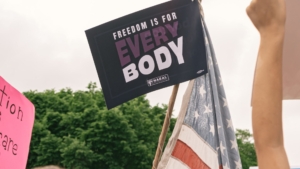 The word feminist was an ear chime in 1968, a sound that every cell in my body registered.  I was standing in history’s crossfire. Transported from a childhood home steeped in traditions forged by an unyielding father figure and literally dropped right into the hurricane eye of uber-radical UCLA. Talk about frying pan to fire.  The notion that equality—political, economic, social—could be a reality was an alluring fantasy for someone with two considered career choices (once ballerina was out of the picture): nursing or teaching.

Despite this liberating environment, this incredible awakening from deep slumber, all those youthful years of conditioning wielded an entrenched authority that kept me on track.  Although I did manage a slight left turn from nursing to physical therapy.  By 1973 I was a brand new hireling in the halls of health care delivery right when the U.S. Supreme Court ruled to protect a woman’s liberty to choose her reproductive fate.   It was a timely ruling, a logical outcome of feminist sensibility.  Why would anyone believe that the US government could hold sway over my body?  In what cockamanie world does that make sense?

In that same moment, Watergate was blasting over the airways and  religious fundamentalism was weaving church and state in totally disturbing ways. Official policy seemed to be steadily moving to the dark side.  And this, my friends, as it turns out, was only the beginning.  At the same time all this was coming down, I was an eager novice in varied clinical settings, growing a foundation in healing skills to serve patients.  In clinics similar to mine, in other quiet rooms dedicated to the relief of suffering, bombs were exploding.  This siege has never abated.

And now this. Fifty years down the road, Roe vs. Wade overturned. It is inconceivable.  Even an imagination as active as mine cannot conjure what it means to be 14 years old, poor, newly pregnant and living in the foreign territory of Texas.  All the rhetoric I can hurl from this white tower of privilege doesn’t touch the outcome for this wrong place, wrong time needy human being.  I want to be outraged.  I really do.  I know it’s in there.  But right now all I feel is utter exhaustion.  Clawed into place gains….lost.  We are pedaling backwards toward an abyss that is frightening.  The only hope I can summon is that just maybe this is the final gasp of a way past the expiration date dysfunctional patriarchy.

I don’t have anything else to say here except that it’s your body.  Every human being deserves the right to choose what to take into their own body—physically, emotionally, mentally.  Each of us needs support in finding our own unique way to process and assimilate those choices.  And every body is entitled to let go, to release that which does not serve.

Please vote.  And if you can afford to give, National Network of Abortion Funds is a good recipient.  And the only thing I know for sure to do right now is to keep moving.  That, too, is a choice.  Let’s do that together.