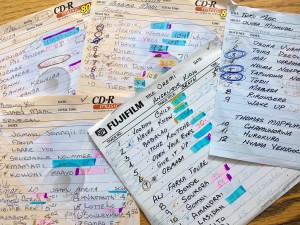 Have you experienced musical transport?   Heart-cracking melody, bliss-delivering lead guitar, bone deep vibration. Human beings have been making music forever. It nourishes us with life-giving properties that food and water and air just cannot provide. Still riding the energy of Guitarfish where day after day filled with the physicality of dance re-affirmed my love and commitment to the healing power of this modality. Sometimes, in the inspired place of intentional practice, I forget that the pure act of simply letting energy move on through can be enough. I am feeling awesome this morning.

Besides the somatic liberation, on Saturday night under forest stars, crescent moon waxing at the horizon, surrounded by the driving pulse of people and sound, I was transported in time. Vieux Farke Toure burned up the stage and re-connected me with the roots of my obsession with discovering music that moves people. Fifteen years ago, when I began to dance the rhythms in earnest, class on Tuesday night was never enough to fill my cup. To dance more, I raided my own collection, fascinated with critically listening and identifying tracks that evoked each of the five rhythms. I created my own home-brewed waves and just kept on truckin’ the rest of the week.

Mercer was another Tuesday night mover. He had an extensive music library and apparently knew, long before I did, that this dancing path was about to fully claim me. Mercer…if you are by any chance reading this…call me! He took to heart my world music education and every week brought me another CD stack, burned and carefully inscribed with track titles and artists. I pulled them out this morning…see picture above.

It wasn’t long before I was beat counting, color-coding by rhythm, creating waves on the spot with ease. But more importantly, this pop-listening mama, was bathing in the music of the world. Ali Farke Toure (Vieux’s father), Baaba Maal, Ismael Lo, Angelique Kidjo, Gigi Shabaw, Aster Aweke, Salif Keita, Thomas Mapfumo, Oliver Mtukudzi… these were the African artists moving me with depth and soul and roots that felt incredibly different than the derivatives. I was drinking from the source. I spent hours and hours with hundreds of tracks in my front bedroom (before studio). I’d enter at noon, intending to listen and move for an hour or so. Hunger for dinner at seven would pull me away. I had never been possessed like this with anything before or since. It went on a long time and still seductively calls me back with regularity.

Being a witness to the evolution of what is offered on the dance floor is fascinating. I still pepper sets with these original tracks AND technology has created a taste for something different as well. People respond to resting into a steady machine-generated kick beat. Some will not release or let go with the support of pure drumming alone. Old music re-mixed makes it new and inviting again. I wonder about the comfort of a reliable beat in contrast to the possibility of surprise when real musicians play real instruments. Is there something about current time that creates a need for more predictability in music? Is this my own perception unfounded in fact? Can I believe what I think I see out there on the dance floor? Am I getting old and out of touch?

For me, Vieux Farke Toure’s tight set, three inspired musicians weaving their art magic… that was the real deal. DJ electronica offered between acts; bands that technically back their instrumentation; performances heavy with pretence and spectacle just did not move me like the real deal. There were three other bands I loved; they were real deal as well.   For a flavor of real deal, listen up. Let the complexity of this Vieux Farke Toure track create the pure physicality of response. For aficionados this lives right on the transition between flow and staccato:

I’m spinning the Sunday Sweat in Nevada City this weekend. South Yuba Club is where I cut my DJ teeth, offering up many sets primarily of this nature before the craftsmanship of what was available shifted. I’m sure I’ll weave some originals in! Let’s focus on what transpires when we release any intention except full on surrender to the pure physicality of dance.