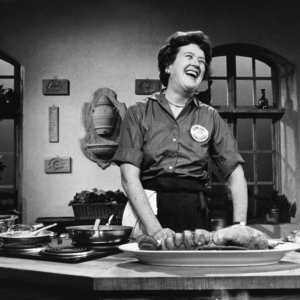 The smell of Grandma’s kitchen lives on in my cells.  The slope of her spine bending to peer in the oven. Her low drone hum as she mixed and bustled and served.  But despite being a grateful recipient of my own Mom’s inherited flair for cooking, I embarked upon adulthood with a specialty in chocolate chip cookies.  Only.  I remember calling home, scribbling marinara sauce details on a torn grocery bag. Which remained taped to the kitchen wall, often referred to as I floundered through that initiation year.  But apparently the cooking thing ran in my blood.  And when I’m fed by my son or daughter…well it is so gratifying to feel how it has been passed through.

When my mom died I inherited Mastering the Art of French Cooking by Julia Child.  But I never cracked it open.  Too immersed in Diet for a Small Planet and Laurel’s Kitchen.  Who cared about soufflés and coq au vin and all that butter and cream?   I had no idea what a seminal influence Julia Child was until her screen story fascinated me.  First via Julie & Julia, then the documentary Julia and now the current HBO series also named Julia. Not to mention this always-gets-me-laughing 1978 Saturday Night Live parody by Dan Akroyd.

All kidding aside, in her late 30s, living in Paris, Julia Child experienced  “an opening up of the soul and spirit ” after a meal of oysters and sole meuniere and good French wine.  By the age of forty, squarely in mid-life, she graduated from the Cordon Bleu cooking school in Paris.  Over the next few years she studied, taught cooking and partnered to create a cookbook that Americans could digest.  When her book was published in 1961 the typical American homemaker was caught in the thrall of convenience.

Canned tomato soup and lima beans, frozen Salisbury steak T.V. dinners and Swanson’s chicken pot pies, Wonder bread and Miracle Whip.  You get my drift.  I totally remember gagging on canned asparagus served with a dollop of Hellmans and canned pimentos.  These products were in my home right alongside that homemade marinara sauce and other delectables made from scratch.

Some would argue Child’s influence carried us from the non-chalance of 1950’s American cuisine to our current obsession with all things gourmet and local and organic and fusion.  I have eaten in many places around the world and always appreciate coming home to the freshness and inventiveness of California cuisine. It definitely was not like this fifty years ago.

In 1963 there was no such thing as a TV cooking show.  In fact Julia didn’t even own a television.   She just she had utter confidence in the concept, deep unshakeable knowing that it would prove to be the best way to connect with her audience.  She had to maneuver her way through a cadre of male doubters to manifest this belief.  She never waivered, even funded the first episodes herself.  As ground breaking as all this was, what really captivated me was the juxtaposition of her television show success with her stage of life.  When The French Chef finally hit the airwaves Julia was 51 and smack dab in the midst of hot flashing menopause.

The physical symptoms accompanying the “change” get way more airplay than the more subtle aspects.  A lifetime of biological programming to procreate and rear children does not go away with a shift in hormonal status.  For many, the spirit of creation re-invents itself.  The so-called empty nest can unleash inspiration that has been patiently or not so patiently waiting in the wings for it’s moment.

This was surely my experience.  I flailed for a couple years after kids left the nest.  Comfy home, good relationship, thriving business.  But all this sad poetry, a depressing dissatisfaction, a what’s-the-point attitude.  At the age of 52, in the most synchronous random fashion, I fell into the dance.  It was like a portal awaiting my entrance.  And though it was quite awhile before I realized it, chapter two had finally begun.  Without reservation, I danced my way through menopause, barely knew it was happening until it was over.  And with utter clarity, I sold that thriving business and started over.

So I am head over heels in love with Julia, rooting for her every step of the way in this series that does not complete until May 5.  I’m sure it helps that I absolutely adore creating just about anything in the kitchen.  But really, this is this story of a woman who goes all the way in the second half of her life.  I feel lifted on her wings.