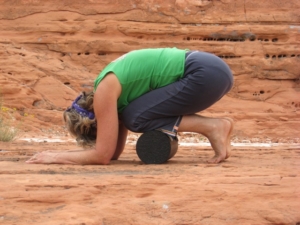 Let’s talk about all things foam roller.  This inventive tool slipped into my life in 1992, introduced by a PT who worked in my clinic.  Absolutely love at first sight, such a potent creative memorable chapter. We were all over the infinite ways rollers could be used for enhancing mobility and stability.

But where did they come from originally?  Because now they’re ubiquitous.  You can friggin’ buy one at Target.  Dr. Moshe Feldenkrais, an Israeli scientist born 1904 was the first known user of the foam roller.  He worked in Paris as a nuclear physicist and also was the first European to earn a black belt in judo.  This martial arts/science blend set him on his own path to healing a gruesome knee injury.

Eventually he developed the Feldenkrais method, a movement discipline blending physics and neurophysiology, a unique way to foster nervous system re-wiring.  When he started playing with packing foam rollers in the 70s, he quickly incorporated them into his teaching.  It wasn’t until the early 90s that foam rollers began to spread in popularity. Physical therapists were early adopters and now four decades after Feldenkrais first started using them, they’re a mainstay.

Except for many of us they are a mainstay in a dusty corner of the room.  And there are so many reasons they can end up there. At the top of the list? Less than optimal guidance for use.  If you’ve not had expert instruction in technique and sensory attunement and easy modifications…well, you just don’t know yet what you’re missing!  Right up there on that list of reasons…density.  If you have a roller that is too hard, painful to use…well, it’s gonna sit in that corner.  And just as true, if you have one that is too soft and you just don’t feel like it does anything…corner.  Read about densityhere.

Next thing on the corner list?  Time/discipline/interest.  Lumped because maybe you’ve never had the experience of utter pleasure that rolling can offer.  Because is you’ve felt the “hurts so good” effect….hopping on that roller is a natural, only takes a moment and the release feels so awesome.  And the release is reason numero uno to use one.  We’ve all got connective tissue (AKA fascia) that is bound up secondary to injuries, genetics and basic gravity wear and tear over a lifetime.  And this less than optimal tissue wreaks havoc that shows up in so many ways.  Releasing is almost always the first step in healing.

So on Saturday January 29 we’re gonna take it REAL SLOW for an hour.  By 10:30 you will feel soft and mushy and have a real clear sense of how to hop on again for some more pleasure.  Want the recording cause you can’t make that time or you were there and want to do it again?  It’s all yours.

Now we are going to take it slow but this video is a quick run through of the territory….

An Essential Introduction: you can enroll for just Saturday January 29 9:30am.  Or if you want to be introduced to all things essential, enroll for all four Saturdays: rolling, tennis ball releases, core strength, stretching it out.

Let’s be on a roll together soon…❤️Bella